Well, well, well.
Yesterday I was going to write a really wonderful post about (drum rolls, please)
the county of Hampshire.
My home county and new-old home, Jane Austen's home county, the county in which Arthur Conan Doyle wrote the first Sherlock Holmes story (A Study in Scarlet), where Keats wrote The Eve of St Agnes ("Ah, bitter chill it was!") and was inspired to write the ode To Autumn (you know, "seasons of mist" etc., etc...), and the place where the Burberry mac was first invented.
Impressive, huh?
I hope you like the way that I put myself at the front of that list.
Nothing quite like having ideas above one's station or anything.
Ahem.
Where was I?
Oh yes, "the post that never happened" (I've had quite a few of those).
Firstly,
my application got rejected
for
yet
another
job.
It's becoming quite my thing NOT getting a job.
Er, then I pulled myself together and decided to count my blessings and go and ride my horse
(yes, you're well within your rights to withhold sympathy).
Imagine my horror when I discovered that her leg was covered from the stifle joint to the hoof in dried blood  and wet, oozing blood.
And quite a bit of gore.
Not for the fainthearted.
So by that time I felt I had licence to feel exceedingly sad.
Which I did. 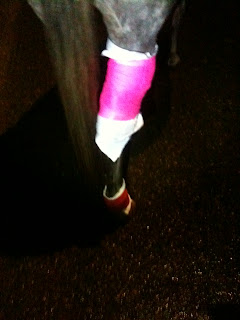 I cheered up after a quick (actually, very long) visit from the vet
at after-hours call-out rates, naturally
and the sight of Poll tucking into her hay, trussed up in another neon pink bandage.
Please note that in the picture below she only has 1 bandage, whereas in the picture above she has 2.
That's how bloody and mucky her legs were (even after hosing) - we thought that there had to be 2 injuries because so much blood couldn't have come from just one cut.
(Cue major embarrassment when the vet investigated further and told us that we'd mistaken dislodged blood clots for open wounds. My bad).
When I checked on her first thing this morning the bandage was wrinkled 'round her pastern (sort of like the ankle but not) like Nora Batty's stockings, which rather spoiled the effect, but her leg was a lot better and had stopped bleeding.
Phew.

So basically, this post is an extremely long-winded way of saying...
I haven't really got anything to say.
Until tomorrow.
Or maybe Friday.
We'll see.

Posted by Life in Transition at Wednesday, November 14, 2012 3 comments:

If you don't like cats or horses, this one's probably not for you.
I will judge you, though.

1. There are many plus sides to moving back south and one of the best of these is spending more time with my godson.
We have a weekly date and he comes to ride 'little' Polly, which makes my heart melt.
(Actually, the running I have to do so that he can trot makes my heart explode... all in the wrong way. Must work on aerobic fitness).
It's a handy plus-side that G brings along his mum - one of my closest friends - on our dates
(being 3 he finds it difficult to travel alone, you know, driving and all that)
and we get to make up for hardly seeing each other for the last 10 years.
G sometimes calls me Auntie Leg (that's not a misspelling)
but most of the time he just calls me 'that big girl'.
Nothing quite like kids to put you in your place.
2.
The cat's a Giants fan.
My brother & sister-in-law are very impressed. 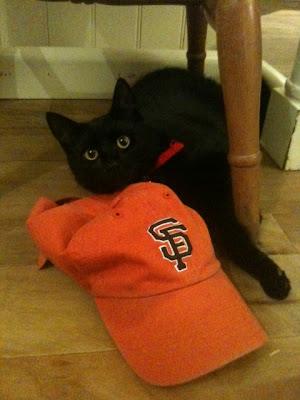 3.
F&P have settled in beautifully at their new home.
Big sigh of relief. 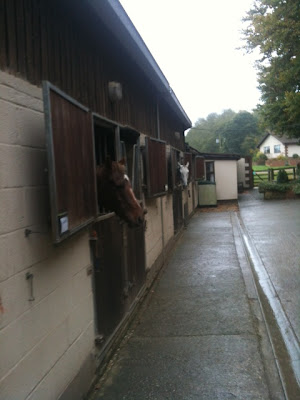 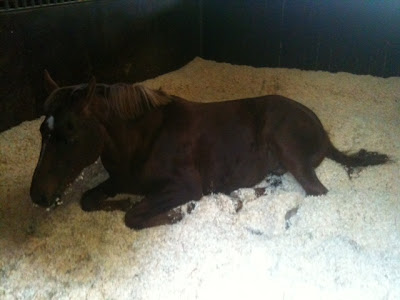 4.
Scoop is obsessed with sinks and water.
Great for cute photo opportunities, not so great for hygiene. 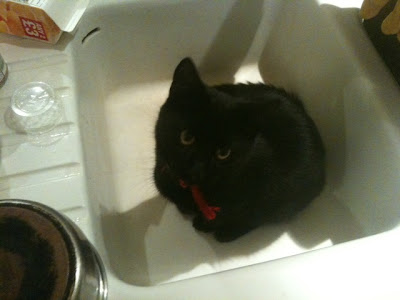 5.
Drumroll please...
This is the FIFTH weekend in a row that I will spend with DPB.
And we still have stuff to talk about.
Winner.
Hope you have a WONDERFUL weekend, too!

From My Grey Desk
Posted by Life in Transition at Friday, November 09, 2012 4 comments: